A Passion For Fashion at Bleu Bowtique

Ne’Gyle B. knows that a good outfit can set the tone for your entire day. The color, cut, style, pattern, and material of your clothing can help express who you are as an individual. And when you feel good about yourself, your confidence can soar. It’s this feeling of individuality that Ne’Gyle tries to help each of his customers discover at Bleu Bowtique1, nicknamed Midtown Detroit's man cave of fashion for the sophisticated gentleman.

When most people think of locations known for fashion, they think of L.A., New York, Paris, or Milan. But most people don’t know that Detroit used to be a hub for the textile industry. During the economic boom after World War II, major luxury clothing retailers lined the “Avenue of Fashion” on Livernois Avenue between Six Mile and Eight Mile.

Style guru Ne’Gyle is on a mission to put his city back on the map as a fashion mecca. To do this, he stocks limited-run articles of clothing and creates high-quality, handcrafted bow ties that can’t be found anywhere else.

Over the past few years, clothing subscriptions and services have become a popular way to get a personalized shopping experience. But these services often don’t provide style advice or clothing that is tailored to an individual. With an eye for style and design, Ne’Gyle understands that a special piece of clothing made just for you can make any day feel extraordinary. Plus, not many people can say that they know exactly where their clothes are made or know the individual who made them.

It All Started With A Bow Tie

Ne’Gyle’s journey to becoming a business owner started with a bow tie. At the time, he was working in a management role for a Fortune 500 company. One morning, he decided that he was tired of wearing a traditional suit and tie to the office. So, he switched up his wardrobe by wearing a colorful paisley bow tie.

“That bow tie was the talk of the office for the entire day,” Ne’Gyle shares, laughing at the memory.

From that day forward, he started wearing more bow ties because the accessory felt unique to him and his personal style. His signature look was always a conversation starter, and soon people were seeking his advice on all matters fashion. 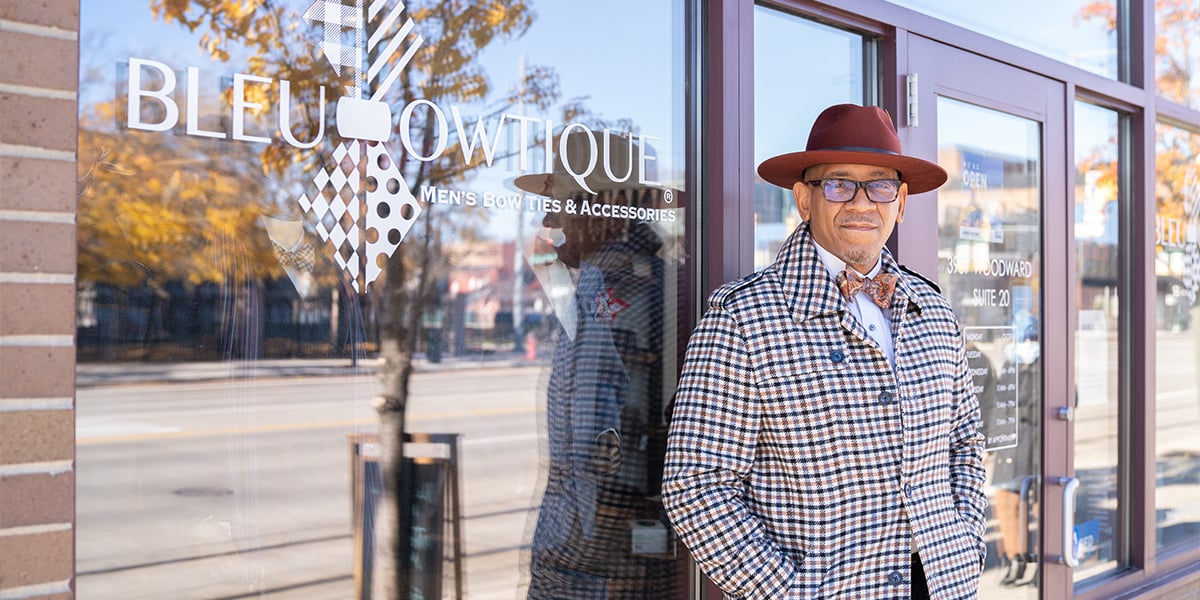 Soon, Ne’Gyle entered the clothing industry by selling bow ties. He tested out the market for the product by selling the bow ties at his local barbershop, from a foldable table in his garage, and even from his car. Then he found opportunities to attend vendor shows – like craft and art fairs – and demand for his ties steadily increased.

He started doing research and went to a convention in Las Vegas to meet individuals in sourcing – manufacturers or people who could help make products. Yet, many of the manufacturers he talked to didn’t seem like a good fit for his vision because they wanted him to place bulk orders of bow ties. But Ne’Gyle wasn’t in this business to simply sell bow ties. He wanted to provide a custom experience for his customers and create an accessory that felt unique to them.

Ne’Gyle’s pursuit of custom accessories then brought him to New York. There, he found a wide array of beautiful fabrics in every color, pattern, and material that he could imagine. And he also connected with a manufacturer who seemed to share his passion for custom fashion. So, he placed an order of bow ties and headed back to Detroit to continue working on other aspects of the business.

A few weeks later, his order finally arrived. But Ne’Gyle’s anticipation and excitement were quickly replaced by anger and frustration. The bow ties were flat, the stitching was off, and the overall quality of the product was poor. The New York manufacturer obviously wouldn’t be a good partner either. But now what was he supposed to do with a box of sub-par bow ties?

Fueled by his frustration, Ne’Gyle jumped in his car, drove to his local Costco, and purchased a sewing machine. Though he had no prior sewing experience, he quickly taught himself how to use the machine and stayed up all night redesigning and remaking the bow ties from New York. The consensus from his friends and family was unanimous: The design and craftsmanship of his bow ties far exceeded the ties he had purchased. It was then that Ne’Gyle decided he wouldn’t just sell bow ties; he’d make them too.

Ne’Gyle has come quite a way from that long night working at his first sewing machine. Now, nearly ten years later, this Lake Trust business member proudly makes one-of-a-kind bow ties each day at his store, Bleu Bowtique, in the heart of downtown Detroit. With the help of a small business microloan, he now has a powerful new sewing and embroidery machine that allows him to do monogramming and create even more custom designs on his ties. And he’s more than happy to accommodate special orders, like creating bow ties from material that his customers bring him or stitching a special date on the back of a tie.

Since starting out in a 127-square-foot space in Cass Collective in 2013, Bleu Bowtique has moved into a larger location on Woodward Avenue and has expanded beyond just offering accessories; it’s a complete men’s clothier that carries pieces for an entire ensemble.

“Though the world is going more casual, we still have occasions where we need to dress up. Think about any time you need to go to a job interview, a wedding, a funeral, or even just to take your wife out to dinner,” Ne’Gyle explains.

Though he’s often complimented on his keen eye for style, the best part of Ne’Gyle’s work goes beyond simply helping someone find an outfit: He helps people change the way they think about themselves. Whether it’s a groom hoping to impress his bride on the big day or a person trying to muster up the courage to tackle a job interview, Ne’Gyle knows that something as small as a bow tie can increase your confidence and help you stand out.

A Little Luck In Every Stitch

For some people, Ne’Gyle’s bow ties even have a little bit of luck woven into every stitch. A man near a local shelter noticed Ne’Gyle’s bow tie one day, and the man asked if Ne’Gyle could show him how to tie a tie. Ne’Gyle often works with local youth groups and teaches teens how to tie a tie and dress for important occasions, like job interviews, so he was happy to give the man who approached him a quick lesson.

A year later, Ne’Gyle was walking down the street and a man stopped him. It was the same man who asked Ne’Gyle for a lesson in how to tie a tie. The man thanked Ne’Gyle and shared an update: He had gotten the job and completely turned his life around. 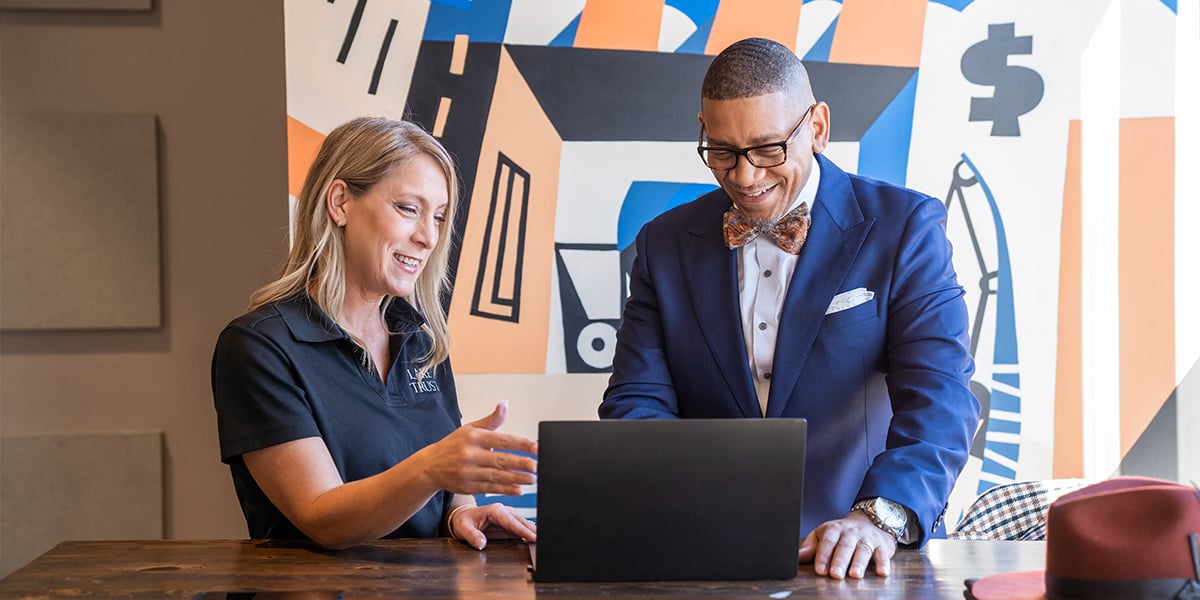 No Dream Is Too Big

Like many business owners, Ne’Gyle is still navigating the challenges of the COVID-19 pandemic. But that doesn’t stop him from dreaming big. One day Ne’Gyle hopes to design and manufacture his own fabrics. Though some would think this is a lofty goal, it fits with Ne’Gyle’s vision to put Detroit back on the map as a fashion destination.

Prefaced with advice to create a business plan and do market research, Ne’Gyle encourages other entrepreneurs to dream big too: “Follow your heart. If you have a vision, put everything in place and go for it. No one is going to see the world as you do, and it’s important to remember that.”

There’s power in a dream. And sometimes these dreams can be wrapped in a bow tie.

SEE ALSO: The Ride to Creating A Well-Loved Business At Hometown Bicycles  |  Finding A Home With Momentum Construction

To learn more about Bleu Bowtique, shop online at bleubowtique.com1 or visit the shop at 3939 Woodward Ave. Suite 20 in Downtown Detroit.

1Third party website. Lake Trust Credit Union is not responsible for the content, availability, security or compliance of any linked third party websites. In addition, the site's privacy policies may differ from those of Lake Trust.